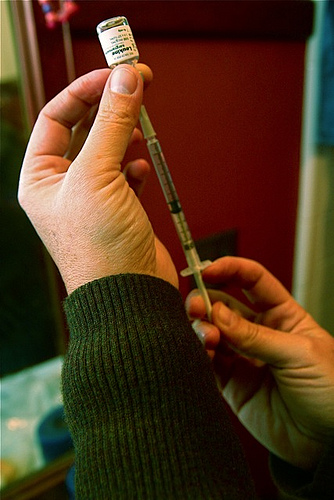 In January of 2015, Dr. Jack Wolfson was interviewed by NBC News regarding cases of measles identified in California and Arizona. This interview led to multiple TV appearances and newspaper interviews. For more information about this controversy and Dr. Jack Wolfson’s opinion on vaccination please read on.

There are not many things more controversial than the subject of vaccination. Religion, politics, same-sex marriage etc. sometimes pale in comparison. Being raised in a medical family and fully vaccinated, there was actually not any controversy. You just got the “jab”. No matter the bug, get a shot against it. No questions asked. Even in medical school, where questions should be the norm, vaccines somehow escaped that discussion. That is how I was raised and how I was trained.

But after meeting my future wife, I started asking questions. Was a vaccine needed for chicken pox? How many people were harmed from this viral infection. Was there any benefit to natural immunity against the varicella virus? What are the ingredients in this vaccine? What are the ingredients in all vaccines? Was there more to the eradication of polio and smallpox than what we were told in medical school?

The list of questions became very long and encompassed the 16 viruses and bacteria in the current U.S. vaccine program. Do we need to vaccinate every newborn against hepatitis B? This vaccine, after all, contains a billion billion aluminum particles. Three doses are given.

If we cannot question the current health paradigm, what are we? How can we improve healthcare without critical thinking?

Once I started reading and understanding the truth about the way the body works from a health perspective, I changed my vaccine tune. We developed a 3 hour PowerPoint presentation dedicated to the vaccines, the ingredients, the side effects, and the benign nature of these infections. The focus was on how to be a healthy host. If bugs were the only factor in illness, we would all be dead. But since we have a functioning immune system, maintained appropriately, bugs will not present a problem.

After years of informational lectures to hundreds of parents, I was interviewed on the local NBC affiliate regarding a measles outbreak. This “outbreak” has come and gone. No one died. In fact, if someone was seriously stricken with illness from measles, the news would be all over it. Measles is a benign virus in the US. Starving Africans, maybe a different story.

The NBC interview stoked plenty of anger in people who subsequently criticized me in the Arizona Republic. Right away, calls were coming in to strip my medical license. Frankly, I was shocked by this response and decided to create a rebuttal that was published on a website called VaccineImpact.com. That post went absolutely viral, viewed by hundreds of thousands of people. Friends, family, media etc. all got wind of that post, which only created more of a firestorm.

The next day, I received calls from CNN, Fox, the Washington Post, USA Today, and dozens of radio stations. On CNN with Erin Burnett, I tried to get my point across, but was railroaded from the beginning. The host even chimed in on how she had done her research and vaccination was best. No surprise from mainstream media who are owned by their pharmaceutical company masters. The opponent doctor was just like I used to be, brainwashed into the pro-vax mantra.

On the same evening as the live CNN interview, another CNN crew filmed me at my house. It was late and everyone was tired, but for 45 minutes I answered questions. The reporter asked the same question over and over, “How would you feel if your child infected another child who became ill?” My answer every time was that it pains me to think of another child who is sick and stricken with cancer. I am a doctor and trained to heal the sick. But as a parent, I do not feel it is my responsibility to put my child at risk to potentially protect another child.

My answers were twisted to vilify me and present me as cold and callous. I am not media trained and speak from my heart. I do not take back anything I said and meant every word. Could the message have been crafted better? Probably.

But the main issue should remain clear. My children are healthy. We spend every waking moment to protect them, as should every parent. The viruses and bacteria of the world will not damage our healthy children. Prior to pregnancy, during pregnancy, and after birth, the health of our children came first. After all the breastfeeding, co-sleeping, and organic food and lifestyle, do you think we are going to inject our children with dangerous toxins like aluminum, mercury, formaldehyde, polysorbate 80 and animal/human tissue?

In any case, measles is in the rear-view mirror. What is left is legislation at the state and federal level to make vaccinations mandatory. First they are going after the children. Soon, adults will be mandated. Over 200 vaccines are said to be in the pipeline of Big Pharma. Once these laws are passed, our rights over healthcare are removed, and will not be returned. Turning our children into property of the state sounds more like Nazi Germany than the USA.

What is obvious is that we will NEVER outsmart nature. There will always be new viruses and bacteria one step ahead of our brightest scientists. The only real protection we have is our immune system. Evolved over millions of years, it is this barrier that will keep us safe. Injecting chemical toxins into the body like mercury, aluminum, formaldehyde, fetal proteins, animal proteins, and antibiotics is not the answer.

Doctors must always pursue better health for our patients. If we cannot question the current standard, what do good are we? Doctors recommended smoking for weight loss. Dozens of drugs were approved by the FDA only to later be recalled. Pharmaceutical companies have been sued because of misleading information. We owe it to our patients to seek the truth. If we blindly follow pharmaceutical company supported guidelines and the advice of doctors on their payroll, society will suffer.

For over 100 studies demonstrating a link between vaccines and brain injury (autism), click here.