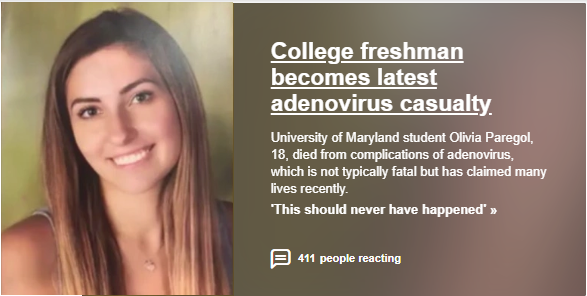 I am heartsick. Another young girl dies from something easily preventable.

But she did not die from a virus.

She died from a dysfunctional immune system that was damaged FROM vaccines. That is what vaccines do.

She died from a damaged immune system that:

In fact, here is a 2015 study that links several vaccines to inflammatory bowel disease (IBD) and points strongly to a link between the polio vaccine and Crohn’s!!!!!!!!!!!

Here is a link to another study that points to a 50% increased risk of Crohn’s disease from the measles vaccine, although not statistically significant per the statisticians.

Here is another study linking vaccines to inflammatory bowel disease.

Our thoughts go out to the family. I will assume that they did not know that a holistic MD/DO, functional chiropractor, naturopath or holistic nutritionist could have found the CAUSE of the Crohn’s.

She died because she was plugged into the medical matrix and not under the care of a holistic provider (my assumption).

Crohn’s and Ulcerative Colitis have a cause and therefore a cure. Toxic chemotherapy and immune-suppressing drugs are not the answer, despite billions spent on marketing by Big Pharma.

A vaccine would certainly not have been the answer for her. Here immune system was destroyed by pharmaceuticals.

Sadly, here is a link to a case of cranial nerve damage from the flu shot in someone with IBD.

Vaccinate all of society?

We will NEVER outsmart nature. There will always be viruses, bacteria, fungi, and parasites.

The answer is to build up the immune system, not tear it down.