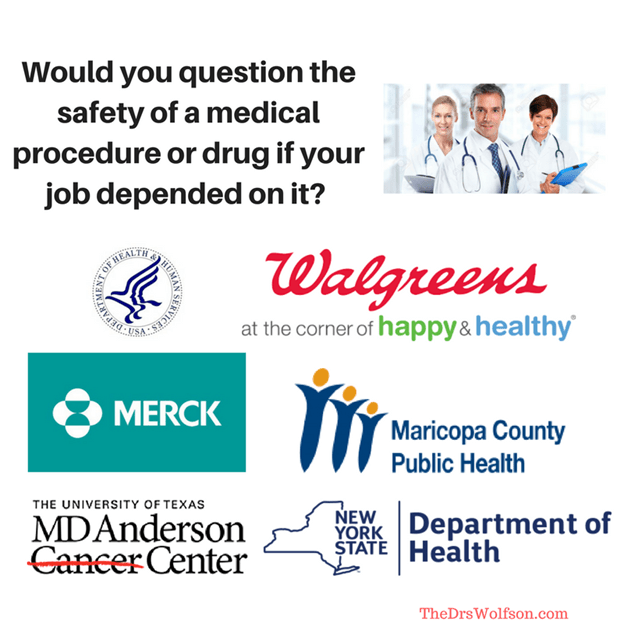 Should a doctor have the right to question a medical procedure?

Surely, every patient would agree and wish for a free-thinking doctor who safeguards the best interest of the patient. Doctors are not free-thinkers. In medical school, we are taught only one way: the sickness model. We believe the body is inherently sick, until a pill or procedure is used.

The pathway to health and wellness has been obvious to so many doctors. But history is littered with those who sought to suppress the truth and maintain the status quo of the medical establishment.

Semmelweis was a doctor in the 1800’s and proposed handwashing to prevent surgical infections and complications of childbirth. It seems implausible that Semmelweis was ridiculed and ostracized by his contemporaries for his theories. After calling them “irresponsible murderers.” Semmelweis spent his final years in an insane asylum.

In the late 1800’s, some doctors dared to question the safety of tobacco. These doctors were vilified. Then, studies were published in the 1930’s establishing the link between tobacco and lung cancer. The MD’s didn’t listen and scoffed at the idea. Only after 7000 articles were published, did the U.S. government call for warning labels on cigarette’s in 1965.

Back in the 1970’s, cholesterol from food and saturated fat were attacked based on faulty data or lack of data. Basically, a lack of common sense. Doctors who espoused the benefits of these foods were ridiculed. But now mainstream recognizes that eating the foods of our ancestors is healthy.

The American Heart Association is there to promote heart disease. Same with the American Diabetes Association promoting diabetes and cancer societies that do not promote cancer reducing behaviors.

Think about the millions of jobs that rely on the medical industry complex as it now stands.

16 million jobs in the hospitals, medical offices, and nursing homes alone.
People who work in pharmacies and rely on the pharmacy to sell junk food and junk products.
People who sell pharmaceuticals, marketers for pharma, the people who make cars for pharma reps to drive, etc. etc.
The Pharma/Medical/Corporate complex is intertwined in just about every job in the country.

As Upton Sinclair wrote in The Jungle, “It is hard to get a man to understand something, when his job depends on him NOT understanding it.”

If a doctor cannot question a medical procedure, what country do we live in?

This is who we are up against. This is the battle we must win. For our children.