Holiday Spices You Need This Season 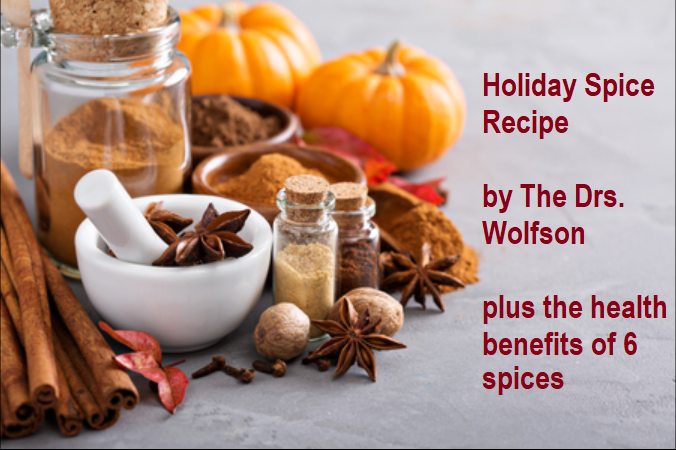 It’s time to cook your holiday meals and you should make them healthy AND delicious.

Use your health “friends”, the holiday spices. These bioactive spices have health-functional compounds and add more to your dishes than just flavor. They help to provide disease-fighting molecules, as well as aid in replacing some of the unwanted sugar or artificial ingredients that are called for in traditional holiday recipes.

If you know The Drs. Wolfson, we are huge spice advocates. We get them into our diet as much as possible. They are natural FARMACY.

Check out this list of the top six healthiest holiday spices and even a recipe at the end. Get cooking!

1.      Allspice: Allspice is a dried, unripe berry of Pimenta Dioica that is reminiscent of cinnamon, nutmeg and clove flavors. The volatile oils of allspice have eugenol in them, making them highly anti-microbial.

·       Allspice is anti-microbial due to its effects on rendering pathogens inactive, where its been studied in food production systems (Du et al., 2009).

2.      Cardamom: Cardamom spice is cultivated from the seeds of a few different plants from the Zingiberaceae family, which is the same family that includes turmeric and ginger. This spice comes in seed pods of varying sizes but is ground for affordability and storage purposes. It is used medicinally in Korea.

·       Cardamom is associated with cardiovascular health. In one study it was shown to lower blood pressure, increase fibrinolysis (anti-blood clotting) and increase antioxidant status (protect the heart) (Verma et al., 2009).

·       Another study found that cardamom was protective due to its anti-inflammatory and anti-oxidative effects in pre-diabetic women (Kazemia et al., 2017).

·       Research has also elucidated its long-standing impact on diabetes. One study shows that cardamom (in phytotherapeutic mixtures) was used long ago in traditional herbal medicine to control blood glucose levels in diabetic patients (Ahmad et al., 2009).

3.      Cinnamon: Cinnamon originates from the spice bark of several trees. It’s flavor and health-promoting effects are derived from its most active compound, cinnamaldehyde, as well as eugenol.

·       Cinnamon is highly anti-inflammatory as it can inhibit the expression of various inflammatory proteins (Chao et al., 2005).

·       Cinnamon has also been shown to impact neurological health. One novel study suggests that an extract of cinnamon can reduce amyloid-beta (protein) clumping in Alzheimer’s disease, as well as decrease plaque formation and improve cognition (Frydman-Marom et al., 2011), making it neuroprotective.

·       Out of 49 spices and herbs in a study, cinnamon was found to have the most insulin-like activity, elucidating its potential for use in the regulation of glucose and insulin metabolism, suggesting roles for diabetes prevention and treatment (Broadhurst et al., 2010).

4.      Cloves: Cloves are dried flower buds. They can be used whole or in powdered form. Their primary flavor profile comes from eugenol. Clove is a strong spice and is best used in small amounts.

·       Cloves are also anti-inflammatory spices as they have been found to significantly inhibit the expression of several pro-inflammatory protein markers (Han et al., 2017).

·       Eugenol, the primary active constituent found within cloves, has been found to exert inhibition of a key inflammation and immune pathway, the NF-κB pathway, which could explain its powerful anti-inflammatory and immune regulatory effects (Bachiega et al., 2012).

5.      Ginger: Ginger is a flowering plant whose roots, ginger root or “ginger”, grow underground. It is a hot, aromatic spice.

·       Ginger is protective against various cancers and diseases due to its ability to modulate a wide variety of signaling molecules and thus control gene and protein expression (Sahdeo et al., 2015).

6.      Nutmeg: Nutmeg is a seed or ground spice derived from the dark evergreen tree’s (Myristica fragrans) fruit. Both mace and nutmeg are derived from this species. The nutmeg spice is made from the seed of the tree. It is a highly flavored, spicy and slightly sweet compound.

·       Nutmeg has been found to have antioxidant and anti-inflammatory properties, as it is able to suppress inflammatory enzymes and lipid peroxidation (Zhang et al., 2015).

·       The nutmeg spice is also anti-cancerous. One study found that nutmeg is able to regulate the gut microbiota and inflammation, thus concluding that it may be a key biochemical link in preventing and treating colon cancer (Li et al., 2015).

½ of a whole organic nutmeg

Roughly crush all of the spices using rolling pin. Then add in the zest. Place all the spices into a cheese cloth and tie up with twine or other modality. Simmer your mulling mix into any liquid. Try a fresh-pressed organic apple juice option. Heat your spices and apple juice over medium-low heat for 20-25 minutes for a wonderful holiday beverage. Happy, Healthy Holidays!

Note: You can alter amounts of any spice depending on personal preference.