The Most Amazing Thing in 7 years of Breastfeeding 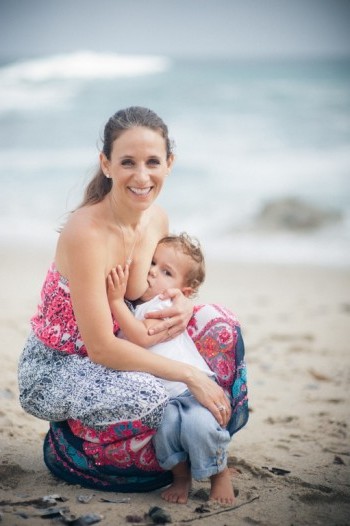 I’d like to share a proud nursing moment…
Unbeknownst to me, my four year old son’s birthday celebration at my sister’s home would prove to be the most rewarding experience in my 7 years and counting breast feeding path.
It was a serendipitous moment as I met a couple who had just had their first beautiful child. Thankfully, this couple had been following us for years and learned the dangers of vaccination before they got pregnant.
Their daughter was a healthy unvaccinated 5 month old but had unfortunately stopped breast feeding due to a vacation the parents took when she was only 3 months old. The mother had pumped enough milk for the five days she would be away from her but upon her return, she found her daughter to prefer the bottle over her breast.

This is an unfortunate response by some babies as it is much easier to get milk from a bottle as opposed to the breast. Not to mention this baby was away from the very person who should never leave her side…especially at such a tender and influential age.  Sometimes, we don’t always listen to our motherly instincts when we really do know better. Sometimes, outside forces can allow us to make poor choices with undesirable and sometimes dire consequences.
This mom was sorely missing this amazing experience of nursing her baby and had tried desperately to get her reattached to the breast.  Sadly, she was unsuccessful at each attempt.  That was until she met two hardcore breast feeding mamas!  My sister, Ivy, and me! Currently both nursing a 3 and 4 year old ourselves!  You can imagine how dinner went after we heard this story!  It went something like this…
The baby had been napping while we were eating dinner and I think between my sister, my husband and I talking to her. Well, it was more like jumping down her throat about the importance of nursing vs pumping. She felt compelled to make one last ditch effort before it was too late. I explained to her that by pumping, not only was she missing the skin to skin amazing bond nursing creates, but her baby was missing the lifesaving opportunity to have the breast milk tailored to her every need.  If the baby is sick, the saliva signals to the mother’s body through her nipple what antibodies are needed and other factors that the baby may need to heal and protect her life. A mother’s milk changes hour to hour, depending upon the baby’s needs.
Another crucial point made was that her already declining production of breast milk would continue to decline at a much faster rate than nursing at the breast. Pumping cannot create the same effect that the baby’s natural suckle, smell and touch creates.  I successfully nursed both my boys exclusively for the first year of life but would NEVER have been able to pump enough milk to exclusively breast feed like this.The more you nurse, the more milk you make. Especially in the case of night time nursing.
Just before dessert, the baby had awoke. She looked to me for some guidance and I knew it was now or never.  I firmly said, take off your shirt and your bra and take off your baby’s clothes, go into a quiet, dimly lit room and place her skin to your skin, body and breast, and do not give up. She emerged 30 minutes later with a grin from ear to ear. The baby had latched again and successfully nursed from her mama’s breast.  She couldn’t thank us enough of course and I made sure to tell her to DONATE the rest of that milk she had pumped previously!

Baby Resumes Nursing After 3 Months Off the Breast!

I must say, there is nothing more rewarding than nursing, and helping another mama get her baby back on that breast is such a great feeling! What an amazing journey this pair is in for! It just gets better every day. 😉