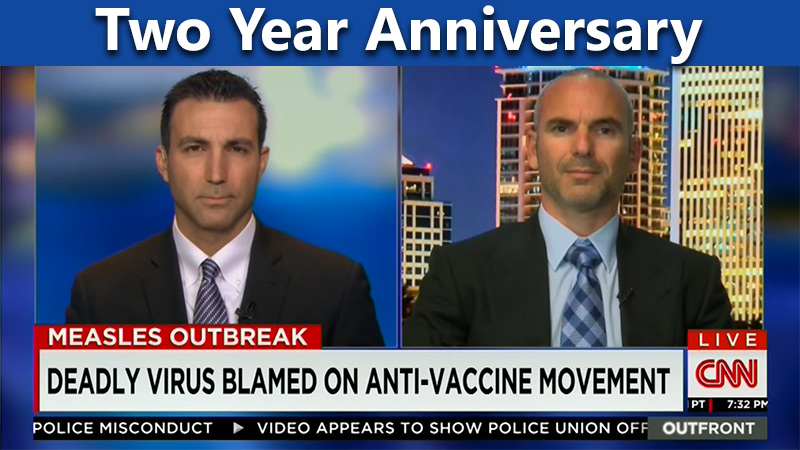 Today marks the two-year anniversary of my appearance on CNN.

The CNN ambush went viral and resulted in a lot of enemies. But more importantly, I gained thousands of friends.

In 2015, I was not very media savvy. Right out of the gate, Erin Burnett and Doc Hollywood steamed forward with their corporate sponsored vaccine agenda. All of the commercials surrounding the segment were for pharmaceutical companies.

The biggest laugh is the end of the piece where “Dr.” Burnett tells us that she has done the research, “vaccinate.”

Are we supposed to believe that the news anchor has EVER read a medical journal? I wonder what research she has done. Frankly, I would be shocked to hear that she did anything at the pediatrician visit besides sit on her cell phone.

My interviews on CNN, The Washington Post, NBC, and USA Today led to 38 board complaints.

The Arizona licensing board did not investigate my case because it falls under freedom of speech.

Doctors have debated vaccine safety since the concept arose in the 1700’s.

Since 2015, we have made a lot of friends and spread our message far and wide.

In 2015, The Paleo Cardiologist was published. In my book, I discuss how heavy metals are linked to heart disease.

Where do you find heavy metals? One place is in vaccines.

In late 2016, Heather and I held a live educational vaccine seminar, Wide Awake. The video is available for purchase.

We appreciate your support of our message. The health revolution is underway. We have plenty of room on this train. Join us.

Here’s a link where you can watch my original interview with Erin Burnett on CNN.