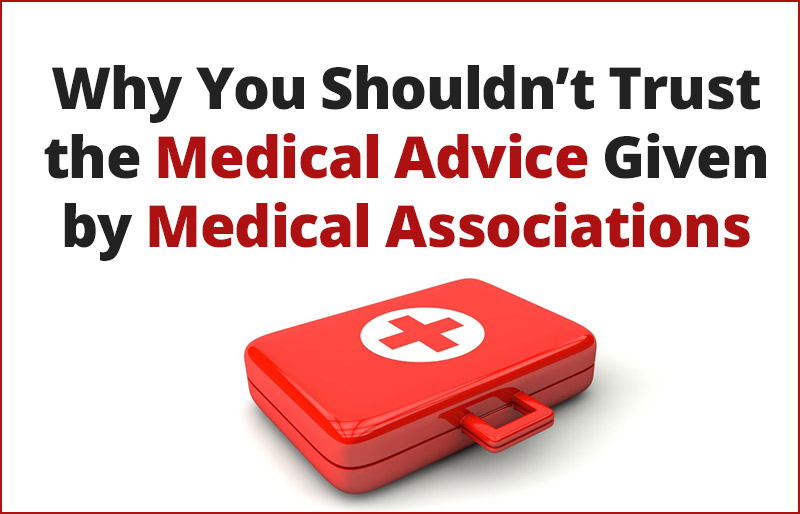 As a cardiologist, it might be natural to assume that I support the American Heart Association (AHA).

After all, what cardiologist wouldn’t support an organization whose stated purpose is to reduce death caused by heart disease and stroke?

In this post, I’m going to outline why I don’t support the American Heart Association. I’m also going to share with you why you should be skeptical about any medical advice or studies promoted by this organization.

Before I start, keep in mind that my advice is not restricted to the AHA. It applies to any medical association. I’m just using the AHA as an example because, as a cardiologist, it’s the medical association most cited by my patients.

My main issue against the AHA and other associations is that they’ve simply become lobbying and public relations shills for Big Pharma.

AHA policies, actions and studies reflect the interests of Big Pharma, and often Big Pharma and your health interests are at odds.

The AHA isn’t out to make you healthy. They’re out to protect the interests of the industries that fund them; that being, Big Pharma and Food Companies.

Not that I’m telling you that Big Pharma wants you to die. See, if you die they can’t continue to earn money from you.

That’s why they want you alive and SICK. That way they can sell you big money meds while they get rich and more powerful.

Medical associations won’t exist if people are healthy. The AHA has more than 2700 employees! If there was no heart disease, there wouldn’t be need for the AHA. The AHA administrators and staff would be out of jobs.

# 2 – Key executives for most medical associations come from or have ties to Big Pharma companies.

Take President Trump’s appointee to head the Food and Drug Administration (FDA), the agency that is, according to their website, “responsible for protecting the public health by ensuring the safety, efficacy, and security of human and veterinary drugs, biological products, and medical devices; and by ensuring the safety of our nation’s food supply, cosmetics, and products that emit radiation.”

Scott Gottlieb was appointed by President Trump to head up the FDA. And as the LA Times reported, Big Pharma was quite pleased, as they viewed Gottlieb as “one of their own.” The Times explains that Gottlieb served as a director or served on an advisory board for six drug manufacturers, and received substantial amounts of money from many more.

The Times further reports that Gottlieb pocketed more than $400,000 in Big Pharma monies from 2013 – 2015, all from companies likely to have regulatory business with the FDA in the years ahead. Gottlieb is also a partner in an investment firm with current investments in 50 biopharma firms, 29 medical device firms and 21 healthcare services firms.

This entanglement with Big Pharma, and his personal financial ties to the industry, make it difficult to believe Gottlieb will be objective in shaping US Food and Drug policy.

Who are we kidding? This guy isn’t going to bite the hand of the industry that is making him rich.

The current head of the AHA, Nancy Brown, is a career bureaucrat. Brown has spent nearly her entire professional career with the AHA.

It’s reasonable to assume that Brown’s perspective and thoughts have been shaped by her environment. And as you’ll see in just a minute, that environment is controlled by Big Pharma funding.

It’s little secret that most of the revenues of the AHA can be traced to Big Pharma and Food Companies.

The Huffington Post reports that a whopping $521 million in donations to the AHA came from non-government and non-membership sources its fiscal year 2011-2012.

Now think about this for a minute. Are Big Pharma companies going to financially support the AHA if the AHA issues guidelines, studies and policies that don’t support Big Pharma interests?

Of course they aren’t.

Because their corporate donors want them to. The AHA is incentivized to promote the interests of its funding sources, not the general public.

That’s why you should always be skeptical of AHA sponsored studies, and that of any other medical association for that matter. All too frequently study results reach conclusions that are in the best interests of the funding source of the study. And that funding source? Very often Big Pharma.

AHA medical advice boils down to three things, all of which in my opinion do more harm than good:

And why do they promote this bogus heart health advice? Because it promotes the interests of their funding sources. Remember, the funding sources of the AHA, and their very existence, depends upon you being sick and taking Big Pharma meds. Big food companies love vegetable oil because it is cheaper than the oils necessary for good health. The fact that these oils make you sick appeals to Big Pharma.

The damage the AHA does to your health and our society is tremendous. It’s about time we stand up and question with skepticism the AHA.

Want more information related to this topic? Read my post about how governments, health care companies, food companies and others want to keep you fat and sick.