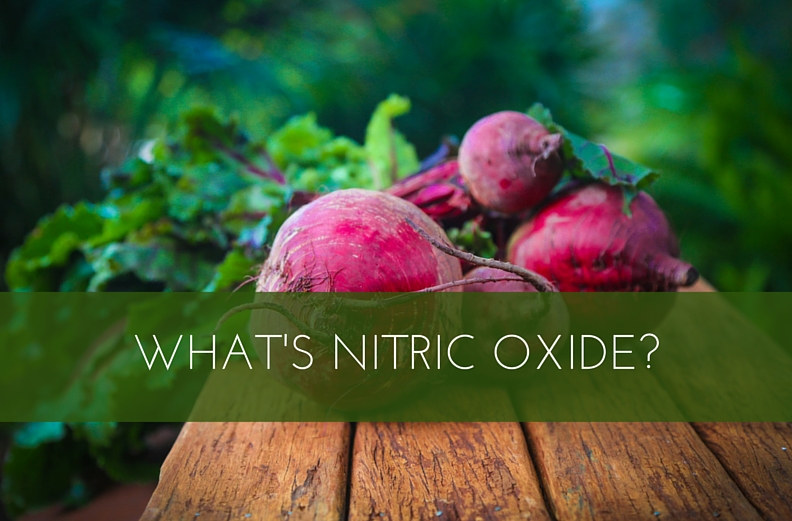 What’s Nitric Oxide (+How Does it Impact My Heart Health)?

When it comes to healthy blood vessels, nothing is more important than NO. That’s right, nitric oxide, abbreviated as NO, keeps your arteries open and even lowers inflammation.

In the air, NO is a colorless gas, naturally occurring and produced by the burning of fossil fuels. But in the human body, it does wonders.

Nitric oxide should not be confused with nitrous oxide (N2O), an anesthetic, or with nitrogen dioxide (NO2), a brown toxic gas and major air pollutant.

In mammals including humans, NO is an important cellular signaling molecule involved in many physiological and pathological processes. NO is a powerful vasodilator that opens up blood vessels. Drugs to increase nitric oxide have been used for over 100 years. Think nitroglycerin under the tongue to a patient with chest pain. Doctors didn’t even know how that drug worked!  The discovery that it was nitric oxide that resolved cardiac chest pain and lowers blood pressure led to a Nobel Prize in 1998.

Nitric oxide in the body impacts:

5) Immune function as it is generated by phagocytes. NO is a free-radical that is toxic to bacteria and parasites.

How The Body Makes NO

The body makes NO in two different ways:

1) From the amino acid L-arginine, NADPH, and oxygen by an enzyme called NO synthase;

2) From nitrates contained in food

Let’s examine each pathway to the formation of NO.

Pathway number one, the L-arginine/nitric oxide synthase pathway, starts with the amino acid L-arginine. Reminder, amino acids are the building blocks for proteins. The body can make amino acids AND obtain them from protein containing foods. In the case of L-arginine, you can find plenty of this amino acid in meat, seafood, eggs, nuts, seeds, and dairy. Spinach contains the most L-arginine among the plants, but it is not much. There is another amino acid, L-citrulline, that can be converted by enzymes into L-arginine. Watermelon rind is a tremendous source of L-citrulline. Many nutritional supplements to boost nitric oxide contain a combination of L-arginine and L-citrulline. This combination allows you to use less of each individual amino acid, as they are synergistic. Oxygen is needed in this reaction. NADPH is a necessary co-factor in the formation of NO that comes from vitamin B3 (niacin). Lastly, the production of nitric oxide (NO) from the above sources requires many enzymes. These enzymes are all subject to genetic and epigenetic modification that can limit their function. Also, toxic metals and other pollutants can “gum-up” the system, leading to a decreased production of NO.

Pathway number two to NO formation is from food. Beets, spinach, arugula, and other green leafy vegetables contain nitrates (NO3). Bacteria in the mouth and gastrointestinal tract convert nitrate into nitrite (NO2). This is why is it very important to chew your food well so the oral bacteria have time to do their work. Speaking of bacteria, most Americans are using mouthwash, a product which is designed to kill oral bacteria. Bad idea. Back to nitrates to nitrites. Now that nitrites are present, they are converted into nitric oxide in various areas of the body. Myoglobin is a protein found in muscle tissue, including the heart, that converts nitrite to nitric oxide. Hemoglobin from red blood cells also performs this action. Endothelial cells that line blood vessels also contain enzymes which convert nitrite into nitric oxide, which subsequently diffuse across the endothelium into the smooth muscle cells of the artery, and ultimately lead to relaxation and improved blood flow. Additionally, salivary nitrite increases gastric mucosal blood flow and mucus production, thereby protecting the stomach.

I Heard Nitrates Were Dangerous

For years we have been told to limit dietary nitrates and nitrites. In the 1940’s, it was noticed that well-water contaminated with high levels of nitrates from farm fertilizers led to a condition in babies called methemoglobinemia. Limits were placed on the allowable levels of nitrates in drinking water. But since that time, studies have been done that found the amount of nitrates in food is much higher than previously thought and is actually quite healthy. In fact, the human body manufactures a large percentage of nitrates/nitrites compared to dietary intake through food.

Processed meat has been vilified over the years and linked to cancer. Nitrites have been accused of being the culprit, but a 2003 review exonerated their role in cancer (WHO Food Additive series No: 50). Nitrates are added to meat and seafood products because they are very effective as a food preservative. Bacteria have difficulty growing in a high nitrite environment. Botulism is a deadly condition caused by a toxin released from bacteria in contaminated food. Sodium nitrate is often added to prevent this condition. Interestingly, nitrites added to animal food products also appear to limit the oxidation of fats and other lipids. This is a good thing.

Whether or not processed meats are healthy is a different story. Myself, I believe that processed meats from pastured animals eating their native diets are okay to eat a couple times per week. But the nitrite does not appear to be the problem and is in fact healthy. A nitrite is a nitrite is a nitrite. All get converted to nitric oxide and open up blood vessels. Many natural and organic products contain added celery juice as a preservative that is naturally high in nitrite. The celery juice was treated with bacteria to form nitrites, which is the actual preservative. Getting tired of all the nitrate/nitrite conversation yet?

Finally, some processed meat, beer, and tobacco lead to the formation of nitrosamines. These can cause cancer. The good news is, vitamin C has been shown to limit the production of nitrosamines (Am J Clin Nutr 1991. 53:1). Veggies along with your pasture raised bacon should do the trick.

Pathway number one can be boosted with the intake of L-arginine and L-citrulline containing food. The NADPH necessary in pathway one relies on ingested niacin for its formation. The enzymes that eventually produce NO from the above ingredients depend on magnesium and other nutrients. It takes a village of vitamins and minerals to stay healthy. There is plenty of evidence that L-arginine supplementation works. A meta-analysis from 2011 demonstrated the efficacy of L-arginine supplementation and blood pressure control Am Heart J. 2011 Dec;162(6):959-65.

Pathway number two relies on nitrate intake from food. This is where beetroot shines. This red root veggie is loaded with nitrates. Pretty much all green leafy vegetables contain nitrates. Unfortunately, cooking reduces the level of nitrates in food.

Plenty of studies have been performed using beetroot juice. Beetroot juice lowers blood pressure and has many other health benefits including anti-oxidant and anti-inflammatory. A study from 2008 found that beetroot lowered blood pressure by 10 points, decreased the stickiness of platelets, and improved the function on the endothelial cells that line blood vessels. Now that is a SUPERFOOD.   Hypertension. 2008;51:784–790.

In my office, I love to test the nitric oxide level of my patients. It is a simple test strip that checks the saliva NO in just a couple of seconds. Results are instantaneous and easily reproducible. The patient changes their diet, lifestyle, and supplements and the test is repeated in a month.

In the end, Paleo nutrition is the way to go. With Paleo foods, you can ensure you are getting all the building blocks you need for healthy nitric oxide production and healthy blood vessels. But for an extra NO boost, you can’t beat the beet!