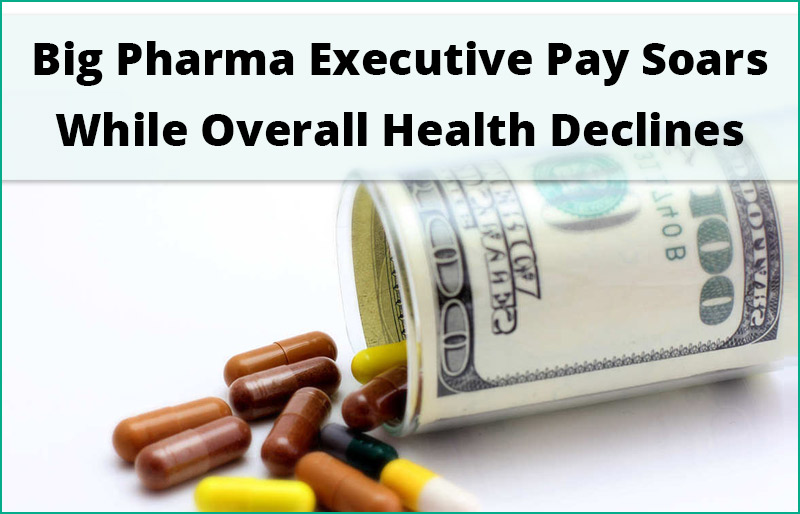 As I research the costs of medical care in America, I can only conclude that a system of food production (if you want to call it that), prescription medicine, government taxation and corporate greed have caused us to lose site of the real problem – the soaring costs of prescription medicines in the U.S.

While Big Pharma executive pay and drug costs soar, life expectancy in the U.S. is on the decline. Death rates in the U.S. are increasing for 8 of the 10 leading causes of death.

Why are costs so high and results so poor? Greed and money. Profits and employment are put before people.

This fact illustrates a point I’ve been saying for quite some time: no one makes money when you are healthy. Doctors make less. Pill pushers make less. There’s less employment, as we don’t need as many medical workers. That means less tax revenues for local, state and federal governments.

The only one that wins with good health is YOU.

Some of these guys make more in a day than the average American makes in a year. The LOWEST PAID guy on this list makes more than $52K a day. Is ANYONE worth that amount of money? It’s outrageous!

And where do you think this money comes from? It’s coming out of the pockets of all the people buying Big Pharma meds. Americans spend 2x as much per capita on health care than any other country in the world.

Senator Bernie Sanders pointed out the huge disparity between Big Pharma medicine costs in the U.S. and Canada. Here’s a chart published by the Senator:

Here’s the big question: why are drugs so much cheaper in Canada? And I live in Arizona. You’d be amazed at the number of Americans that buy prescription meds in Mexico because of the huge price savings.

Price increases are also happening at an alarming rate. See the chart below provided by Bloomberg to see the astronomical price increases in common Big Pharma meds:

Why are prices skyrocketing? One reason surely must be to pay the inflated salaries and bloated overheads of these Big Pharma fat cats. While these guys are lining their pockets, their medicines are making people sick and people are dying at increasing rates.

Between pay and pricing it’s clear to me that we, as a society, are getting ripped off!

So, what should we do about it?

Live naturally. Follow these 25 evidence based heart health tips for optimal well-being. These tips will keep you away from Big Pharma medicines, which is the best way to fight excessive pay and high prices.

Write your state and federal officials. To reach a member of the U.S. House of Representatives, click here and follow the instructions. To reach a member of the U.S. Senate, click here. Let them know that you want pressure applied to lower health care costs, specifically prescription medicines. Share with them your desire to eliminate GMOs. Encourage them to promote economic incentives for organic farming.

It’s time as Americans that we wake up and realized that we’re getting fleeced by Big Pharma. Live right and make your voice heard so we can stop the madness.